Some of you may not have heard of purple potatoes, but now’s the time to get acquainted because a study conducted at the Penn State Hershey Research Institute in Pennsylvania, found that this root has many powerful components shown to be effective in treating cancer. Although the study has now chosen to focus on colon cancer, the researchers believe the findings promise positive results for treatments in its other forms. So what have researchers actually revealed about this colorful potato? What other health benefits are there? And what else do we need to know about the purple wonder that has long occupied Latin American cuisine? 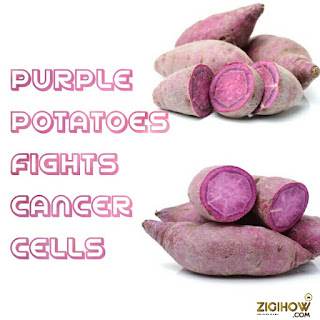 purple potatoes
Purple potatoes grow widely in Peru and Bolivia and are quite popular in the South American kitchen. Now, it seems that we should also add this strange vegetable to our daily diet because beyond the deep purple color that only adds to every dish, recent studies have shown that it has the potential to be a natural and perfect answer to the problem of cancer treatment. Already in the initial study, positive findings have shown that extracts from the purple potato suppressed the spread of cancer cells in the colon.

The researchers were not satisfied with their initial findings and decided to repeat the study again with laboratory mice, which confirmed their positive hypotheses through identical results. Jairam Vanamala, one of the scientists who led the study in the simple comparison, explained the shocking news: “You may cut the weed, but as long as the roots are still there, the weeds will keep growing back and, wise, if the cancer stem cells are still present, the cancer can still grow and spread.”

The explanation for this ability described by Jairam is linked to the fact that this potato strain is rich in anthocyanins, a pigment that gives the vegetable its dark purple color, which acts as a powerful anti-oxidant against cancer. This pigment is joined by resistant starch, another component found in very high quantities and is also considered to be an active anti-cancer substance. The combination of the two, according to the scientists, led to the amazing results of the experiment and turned the purple potato into a natural drug with unequivocal effects on the disease.

Additional health benefits
In addition to the new discovery of their ability to protect the body against cancer cells, purple potatoes are associated with a number of other health benefits that can make them an excellent addition to our daily diet:

The purple potato is rich in potassium, an essential mineral for the human body known to help regulate blood pressure. In a study conducted by the US Department of Agriculture among overweight and high blood pressure participants, those who consumed between six and eight purple potatoes a day had positive results with their blood pressure dropping by an average of 4%.
Beyond their cancer-fighting abilities, the antioxidants found in the purple potato are also known for strengthening the immune system and preventing cardiovascular disease.
Purple potatoes are an excellent source of dietary fibers that help the digestive system function properly and are especially effective in treating constipation.
The caloric value of three purple potatoes that make up a satisfying portion is 131 calories, zero fat and zero cholesterol, which makes them an excellent diet staple.
purple potatoes
As studies in the field intensify, it seems that the fight against cancer is making its way, in a slow and gradual process, from the pharmacy straight to the plate.